Dolphin: Our Love Affair With Our Favourite Cetacean

A tremour ripples through the dark blue water. An onlooker fixes her gaze in wild wonderment as child-like emotions transfix her eyes to a tiny point on the water. A dorsal fin protrudes, breaching the blue skin. The onlooker’s feelings change from fascination to dread.

These feelings once more morph becoming joyous upon the realisation that the animal is not a shark but a most welcome dolphin confirmed by a familiar dolphin grin. Dolphins (Delphinidae) are a fascination to humans. There are not too many animals that can claim to have whole swathes of people clamouring to swim with them. There are numerous things that are interesting about dolphins, but perhaps the best reason for our love affair with them is that they are a mirror into our personality and soul.

The Dolphin has taken on almost mythical status in some peoples’ eyes. There is much speculation as to the nature of both their language and their intelligence. However, the truth of the matter is that we do not fully know or understand how astute these creatures are. They are certainly intelligent and they live highly complex social lives.

Admiration Based On Usefulness

Perhaps chief amongst the reasons for our keen affinity towards our cetacean cousins is their usefulness to us. Dolphins are a great tourist attraction. In times previous, there are many stories of dolphins who protected people who got into difficulty at sea. In essence they are highly advantageous to us. This is mainly due to their intelligence.

Dolphins are incredibly adaptive and learn exceedingly quickly. The US Navy has trained Bottlenose Dolphins to spot mines. The Navy also uses dolphins to locate  swimmers and to recover objects. They can follow quite complicated commands and they have been know to assist many people in peril.

In fact, a group, or ‘pod’ of Orcas assisted whalers in killing Baleen Whales in a small community called Twofold Bay near the port of Eden, Australia.

The Orcas would pin down a Whale by repeatedly body-slamming it, whilst the leader of the pod, ‘Old Tom’, would alert the local whalers by slapping its tail at the mouth of the local river. In exchange for their service and assistance to the fishermen, the dead whale would be left overnight so that the Orcas could eat the lower jaw.

This remarkable quid pro quo act became known as the ‘Rule of Tongue’. 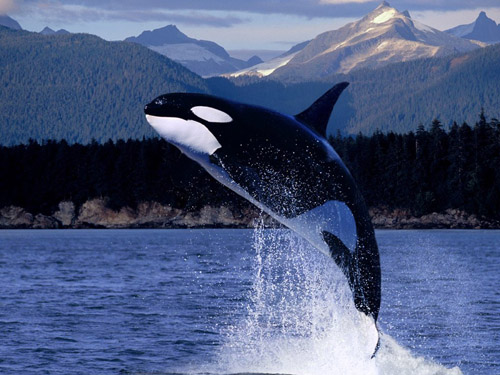 Ask anyone who has every had the chance to be close to a dolphin if they are quiet and they will respond with a definite negative. Dolphins are one of the most vocal animals on the planet. Virtually all of their activities are accompanied by a cacophony of sound.

Each dolphin has his or her own unique ‘signal whistle’ which is repeated over and over as  a constant leitmotif. Some dolphin experts have counted the amount of sounds that a dolphin emits using special software and the results are staggering – over 1,000 a second. The sounds are created through sacs in their nasal passages. Dolphins, like chimpanzees, magpies and humans, have the ability to recognise themselves in a mirror.

Due to the fact that we are two completely different mammals it is very difficult to ascertain the nature of dolphin language. There seems to be different schools of thought on the subject. Some proponents stress that dolphin language rivals human communication in a way that is just as complex and individual as our own myriad of languages. Whilst the other school believes that it is a rather crude and rudimentary language, designed to provide just what dolphins require to survive. The truth is probably somewhere in the middle.

The reason why they appear to have such sophisticated vocal ability is mainly put down to their leisure time. Somewhat similar to our own lifestyle, dolphins provide ample amounts of time for playing. It seems that our worlds are far closer to theirs than we care to imagine.

One of the most remarkable attributes that Dolphins possess is Echolocation. This is the ability to literally ‘see’ sound. Dolphins emit extremely high frequency sound which reflect off objects in the water. This gives the dolphin a 3D image or map of its surroundings. So accurate is there echolocation, that they can distinguish not only different items but different compositions such as the type of metal the item is made from.

There is a darker side to dolphins, contrary to many people’s perception of the cuddly creature,  in that some kill their young (infanticide). Others continually pound and eventually kill their far smaller relative – the porpoise for no apparent reason.

One word of caution for those seeking to interact with dolphins – don’t. A new study conducted by the Whale and Dolphin Conservation Society (WDCS)  into Dolphin behaviour has found that almost all human interaction is to dolphin’s detriment. This includes swimming with them. They advise to view the dolphin from the comfort of a boat where you can gaze at them in their natural environments.

For centuries, dolphins have captured the imaginations of people, from the Greeks to the Romans, all have marvelled at these magnificent animals and noted their keen intelligence and indecipherable language. None have found an answer yet.

Dolphins – The Ultimate Guide is a great DVD which brings the viewer into the world of the Dolphin. There are also countless videos of dolphins available on youtube.

Amazon.co.uk
For people living in Ireland or the United Kingdom, you can access Dolphins – The Ultimate Guide here.

Amazon.ca
For those who live in Canada, you can obtain Dolphins – The Ultimate Guide from here.

14 Responses to Dolphin: Our Love Affair With Our Favourite Cetacean