Figure skating is a supreme sport. A marriage of raw athleticism with delicate poise and gracious movements, it is truly a spectator’s event. Undoubtedly, two of the leading candidates for male figure skating have been the Russians, Evgeni Plushenko and Alexei Yagudin.

Together they have changed the course of the sport and reached new heights that will prove difficult for future skaters to reach. However, while their relationship with one another is now cordial it was not always the case.

The older of the two, by nearly three years, Yagudin was born in March 18, 1980, while Plushenko was born in November 3, 1982. Both men were prodigious talents who first experienced the joy of skating on ice at the young age of four. Yagudin went on to win the World Junior Figure Skating Championships at the age of 16, while Plushenko went two years better, winning the same competition at the tender age of 14.

Both skaters were taken under the wing of renowned ice-skating trainer, Alexei Mishin. However, this relationship would later emerge to create the conflict and animosity that would come to public attention. 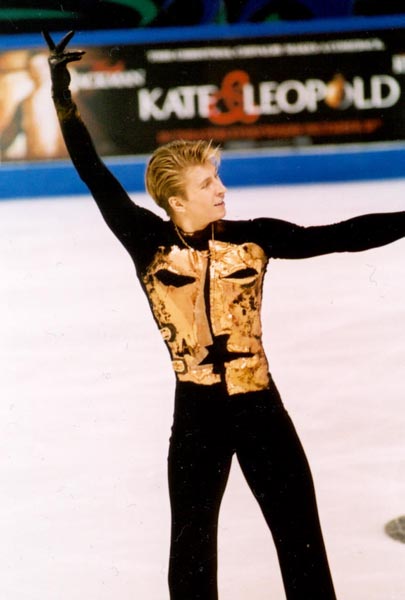 1998 was the year that saw Yagudin win his first big title, the European Figure Skating Championships, beating rival Plushenko into second place. In 1999, no longer tolerant of a fractious relationship, Yagudin left Mishin for good and went to the United States to train under famous coach, Tatiana Tarasova. That same year he lost the Russian National crown to Plushenko. The following year he would go on to win the World Skating Championships.

However, 2001 was to be the nadir of his career and he would end up losing to Plushenko in every competition the two were entered. Nevertheless, he persevered through his bad patch and 2002 would be a bountiful year. Winning every competition, Yagudin proceeded to achieve the highlight of his career winning the Olympic title in Salt Lake City in record-breaking fashion, becoming the first skater to be given four perfect 6.0’s for presentation in his long programme. Later that year, he would become the first skater to receive a perfect 6.0 for required elements and six perfect 6.0’s for presentation.

However, this was to prove to be the zenith of his career as he had been skating with a problematic hip, a birth defect, and as a result was forced to retire from competition.

At the 2002 Olympics, Plushenko finished second to Yagudin. However, shortly afterwards Yagudin retired from competition. This paved the way for Plushenko to win all before him.

He would go on to win all competitions, finishing second on just two occasions as he swept to consequent World Championships and Gold at the 2006 Winter Olympics.

In 2006, Plushenko announced that he would be taking a break from competition to recuperate from previous injuries. After a gap of over two years, and worried about the stated of Russian Ice Skating, Plushenko returned to competition winning the Russian and the European Championships setting a world record score along the way.

Yagudin and Plushenko had a fraught relationship with one another. Competing against one another and trying to gain the attention of their coach, Mishin, probably did not help matters. However, in a world in which only winners are rewarded and runner ups are quickly forgotten, perhaps it was inevitable that the two would not become close friends. Instead, a rivalry born out of proximity and the competitive nature of the two men would cast a shadow on the two competitors.

The situation was exacerbated by coach Mishin who proclaimed Plushenko to be the better of the two skaters thus almost ensuring Yagudin’s departure.

However their rivalry also played its part in making the two better skaters. The competition between the two sparked the other to perform better and better as each tried to outdo his rival. Without Yagudin, it is arguable, Plushenko would not have achieved the dizzying heights he is famous for and vice versa, without Plushenko, Yagudin would not have had half the level of success that he has attained.

Both men are now fathers. Plushenko has a son with former wife Maria Ermak and, as of September 2009, is married to Yana Rudkovskaya. Yagudin has a daughter with pairs Olympic Figure Skating Champion Tatiana Totmianina.

Perhaps fatherhood, and the fact that two are no longer competing against one another, has lead to a healthier relationship between the two.

One of the most techincally gifted skaters the world has ever known, Plushenko was the first skater to perform a quad toe loop-tripe toe loop-double loop jump and the first to land a 4-3-3 combination. He is also one of the few male skaters to perform a Biellmann Spin, as most men lack the necessary flexibility.

Yagudin is known for his incredible footwork and choreography. He also has the ability to melt his performances so that the viewer sees music as a living entity.

Check out Yellow Magpie’s Evgeni Plushenko Quotes: Words From A Revolutionary Skater to see what the man thinks about winning, competition and his fans.

22 Responses to Evgeni Plushenko and Alexei Yagudin: The Rivalry Of The Greatest Figure Skaters